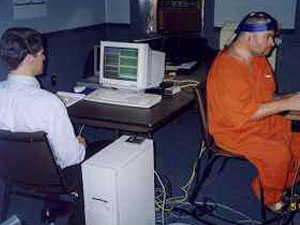 THE TRUTH SHALL SET YOU FREE — In this case, it was the truth that convicted suspected serial rapist and murderer James B. Grinder, right. The test conducted by Fairfield scientist Dr. Farwell, left, identified Grinder as the rapist and murderer of Julie Helton in Macon County, Missouri, 15 years ago.

Technology developed by a Fairfield entrepreneur tied a tidy bow around a 15-year-old murder case in Missouri earlier this month.

The brainchild of Lawrence Farwell, Brain Fingerprinting is a computer-based technology to identify the perpetrator of a crime accurately and scientifically by measuring brain-wave responses to crime-relevant words or pictures presented on a computer screen.

Macon County, Mo., Sheriff Robert Dawson said the state had a strong case against James B. Grinder, 53, in the Jan.7, 1984, abduction, rape and murder of Julie Helton, a 25-year-old Marceline, Mo., woman who worked at a book-publishing company. Her badly beaten body was discovered four days after the murder near a railroad track in Macon, the county seat of Macon County.

Grinder, a wood-cutter who had lived in Arkansas before moving to Macon a few years before the crime, has been “a suspect for years,” Dawson said. In 1993, court-ordered blood samples were taken from Grinder and another suspect – Wilford Swank, a former Macon city policeman free on bond as he awaits trial for first-degree murder – but at the time, there wasn’t enough evidence to indict them.

Grinder and Swank were arrested in March 1998 when Grinder was released from prison, where he had served time on an unrelated charge. Granger had confessed his involvement, but authorities wanted to make sure “we had the right guy,” Dawson said.

Dawson recalled news coverage of Farwell’s patented technique and gave the founder of Brain Wave Science and the Human Brain Research Laboratory in Fairfield a call. On Aug.5, Farwell tested Grinder’s brain for a memory of the 15-year-old murder.

“There is no question that J. B. Grinder raped and murdered Julie Helton,” Farwell said after the test. “The significant details of the crime are stored in his brain.”

For investigators Brain Fingerprinting testing provided a measure of reassurance.

“I think she was planning on pleading guilty, but the test confirmed to us that we had the right guy,” said Dawson. “He told us prior to testing he had committed the crime, but we were trying to verify that.”

On Aug. 11, 6 days after crime-scene specific messages were flashed before him, Grinder pleaded guilty to first-degree murder in 44th Judicial Circuit Court. He was sentenced to life in prison without the possibility of parole, and was immediately transported to Arkansas, where he is a suspect in the murders of three other young women.

Farwell’s technology had proven 100 percent reliable in more than 120 tests on FBI agents, tests for a U.S. intelligence agency, and for the US Navy, and test on real-life situations, including actual crimes.

“The accuracy rate so far has been 100 percent,” Farwell said. “All scientists know nothing is ever 100 percent, so I don’t tout it as 100 percent accurate technology, but I do have high statistical confidence in it.”

The Grinder case was “the first time I’ve been called in on an active criminal case,” said Farwell.

Grinder had confessed to authorities, but “the difficulty was this suspect had told many different stories many different times,” Farwell said. “At times, he had actually confessed, but he later testified and contradicted himself.

“What his brain said was that he was guilty,” the Fairfield scientists said. “He had critical, detailed information only the killer would have. The murder of Julie Helton was stored in his brain, and had been stored there 15 years ago when he committed the murder.”

In terms of the advancement of his technology, the test on Grinder’s brain represents a huge step forward. It’s proven technology in the laboratory, in studies for the U.S. government, in studies on FBI agents and in studies on a wide variety of different times of information,” the scientist said. “What I did in the J. B. Grinder case is to prove the technology can detect the record of a crime stored years ago in the brain of the suspect.”

“We can use this technology to put serial killers like J. B. Grinder in prison where they belong,” he said.

There are hurdles to be cleared, the admissibility of Brain Fingerprinting evidence in court primary among them.

Farwell points out the primary value of the technology is to “identify the perpetrator,” but he said that “if it can be used as evidence in court, that’s an additional benefit.”

“I have every reason to believe it will be viewed the same as DNA,” Farwell continued, explaining the DNA evidence is regarded as scientific and highly accurate, making it admissible in court. By the same token, Farwell believes his Brain Fingerprinting is equally “objective and non-invasive.”

“Anytime you have a new invention, there are some elements of status quo that are going to resist it, and this is no exception,” said Farwell. “It’s not only perpetrators who resist it, but also people who are locked into outdated ways of doing things who don’t like to see new inventions come along that might put them out of a job.”

“We’re not reading minds here, just detecting the presence or absence of specific information about a specific crime,” Farwell continued. “The only people scared are the people who are criminals–and that does include some people in high places.”

The creator of the technology believes it will eventually revolutionize the manner in which suspects are identified and interrogated and, thus, pursued or dismissed.”

“Now, if we have information about a crime can we have a suspect, we can determine scientifically whether that information is stored in that brain or not,” Farwell said.

“It is not only perpetrators who resist it, but also people who are locked into out-dated ways of doing things who don’t like to see new inventions come along that might put them out of a job.

“We ‘re not reading minds here, just detecting the presence or absence of specific information about a specific crime, “Farewell continued. “The only people scared are criminals – and that does include some people in high places.”

The creator of the technology believes it will eventually revolutionize the manner in which suspects are identified and interrogated and, thus, pursued or dismissed.

“Now, if we have information about a crime and we have a suspect, we can determine scientifically whether that incriminating information is stored in that brain or not,” Farwell said. “This means not only that we bring perpetrators and protecting society from the further crimes they might commit, but it also serves the cause of human rights by giving an innocent individual the means to scientifically prove his or her innocence.

“It could save people not only from perhaps false conviction and punishment, but also from the trauma of investigation and interrogation.”

From Farwell’s point of view, he is serving two masters with the development of Brain Fingerprinting.

“There are two kinds of intrigue,” Farwell explained. “One, I have always been fascinated with the brain, how the brain works and how the brain reflects consciousness.”

“There’s another kind of intrigue, and that is, I like catching the bad guys in bringing them to justice. I think that’s a very important thing to do… I was very happy to see J. B. Grinder go to prison for the rest of his life. He killed a number of young women. I was happy to be part of that healing process once and for all.”

How quickly the technology becomes as routine in criminal investigations has securing a crime scene is tied to “how open-minded, creative and intelligent the law enforcement community is,” Farwell said.

“The question is not whether Brain fingerprinting will become a central facet of law enforcement in this country and worldwide, but when and how long it will take,” he said.

“Locally, it scores very well,” said Farwell, noting as an aside that Jefferson County Sheriff Frank Bell has embraced the technology “very much to his credit.”

“I would say there is a lot of potential for something like that,” said Dawson. “I don’t believe it’s admissible at this time, and that’s a big hurdle, but anytime you have got something that’s going to help you ID the perpetrator of crime, it’s going to be helpful. There are not many investigative techniques that are 100 percent accurate.”

What Dawson would really like to see happened is for Swank, Grinder’s co-defendant in the first-degree murder case, to agree to the procedure. Swank is maintaining his innocence and Dawson doesn’t believe he will submit to Brain Fingerprinting testing.

Dawson said that during his sentencing, Grinder named Swank as a co-defendant and also implicated two others, brothers Todd and Charles Blakely. Charges also have been filed against the Blakely brothers, but were dismissed due to lack of evidence.

Farwell said that as word of his technology spreads through the law enforcement community, he is receiving more requests to test subjects in criminal investigations. “There are a number of cases I am currently working on that I can’t talk about,” he said.

He sees the application of the technology as carrying the potential to reach beyond the law enforcement community.

“People who are afraid of this technology are perpetrators who don’t want to get caught,” Farwell said. “Because this tests the brain, it can catch some of the high-level perpetrators like crime bosses who master minded the crimes, but don’t ever get their hands dirty.

“It can also catch crooked politicians,” he continued. “I would like to believe there are few of those, but the ones there are ought to have something to worry about.”

Farwell says “there’s really not a downside to this.”

“What it does is, it gets out the truth,” Farwell said. “The truth will set you free. Truth has value in any circumstance.”

Electrical Brain responses are measured non-invasively through a patented headband equipped with sensors.

Lawrence Farwell had discovered that a scientific brain-wave response called a MERMER (Memory and Encoding Related Multifaceted Electroencephalographic Response) is elicited when the brain processes noteworthy information it recognizes.

Thus, when details of the crime that only the perpetrator would know are presented, a MERMER is emitted by the brain of a perpetrator, but not by the brain of an innocent suspect. In Farwell Brain Fingerprinting, a computer analyzes the brain response to detect the MERMER, and thus determines scientifically whether the specific crime-relevant information is stored in the brain of the suspect.