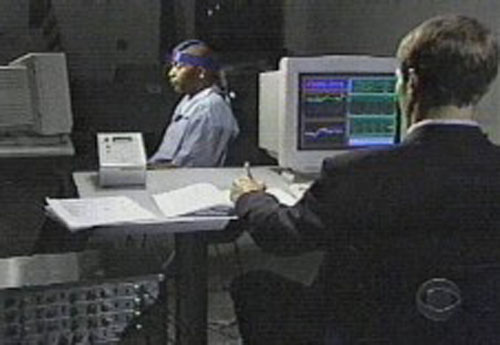 Terry Harrington spent over half of his life in prison for murder. Twenty-three years after his conviction, Dr. Lawrence Farwell used Brain Fingerprinting testing to show with a 99.9% statistical confidence level that the record stored in Harrington’s brain does not match the crime scene and does match his alibi. The testing showed that significant details of the crime are not stored in his brain. The judge ruled that Brain Fingerprinting is admissible as scientific evidence in court. On February 26, 2003 the Iowa Supreme Court reversed his murder conviction and ordered a new trial. In October 2003, the State of Iowa elected not to re-try Mr. Harrington and released him from prison.

In 1977, Harrington, who was 17 at the time, was arrested for the murder of John Schweer, a retired police captain who had been working as a security guard. Court records contain contradictory accounts of the events of the evening of the crime. In the trial, Harrington said that he had been with friends at a concert the evening of the murder. Several witnesses corroborated this alibi. The primary prosecution witness, 16-year old Kevin Hughes, told a different story. He gave a detailed account of Harrington’s alleged perpetration of the crime. A year later Harrington was found guilty and sentenced to life without parole, based almost entirely on Hughes’ testimony.

Now Brain Fingerprinting technology has made it possible to examine scientifically which sequence of events actually took place, by determining which one is stored in Harrington’s brain. Brain Fingerprinting testing determines objectively what information is stored in a person’s brain by measuring brain-wave responses to relevant words or pictures flashed on a computer screen. When the brain recognizes significant information — such as the details of a crime stored in the brain of the perpetrator — the brain responds with a MERMER (memory and encoding related multifaceted electroencephalographic response). When the information is not stored in the brain, no MERMER occurs.

In 1997, nineteen years after his conviction, Harrington petitioned the Iowa District court for post-conviction relief alleging several grounds for granting him a new trial, and in March 2000, he amended his petition to include the results of the Brain Fingerprinting testing.

In the Brain Fingerprinting tests, Harrington’s brain did not emit a MERMER in response to critical details of the murder, details he would have known if he had committed the crime, indicating that this information was not stored in his brain. In a second Brain Fingerprinting test, one that included details about Harrington’s alibi, Harrington’s brain did respond with a MERMER, indicating that his brain recognized these events. The details used in the second test were facts about the alibi that Dr. Farwell obtained from official court records and alibi witnesses.

“It is clear that Harrington’s brain does not contain critical details about the crime,” said Dr. Farwell. “His brain does, however, contain critical details about the events that actually took place that night, according to alibi witnesses who testified that Harrington was in another city with friends at the time of the crime. We can conclude scientifically that the record of the night of the crime stored in Harrington’s brain does not match the crime scene, and does match the alibi.”

When Dr. Farwell confronted him with the Brain Fingerprinting test results exonerating Harrington, Kevin Hughes, the key prosecution witness, recanted his testimony and admitted that he had lied in the original trial, falsely accusing Harrington to avoid being prosecuted for the murder himself.

In November 2000, the Iowa District Court for Pottawattamie County held a hearing on Terry Harrington’s petition for post-conviction relief from his sentence for murder. This hearing included an eight-hour session on the admissibility of the Brain Fingerprinting test report. In March 2001, District Judge Timothy O’Grady ruled that Brain Fingerprinting testing met the legal standards for admissibility in court as scientific evidence.

The judge also ruled, however, that the results of the Brain Fingerprinting test, along with other newly discovered evidence in the case, would probably not have resulted in the jury arriving at a different verdict than at the original trial, and therefore he denied the petition for a new trial.

In August 2001, an appeal of the District Court’s decision denying Harrington a new trial was filed with the Iowa Supreme Court. Dr. Farwell and his attorney, Tom Makeig, filed an amicus (friend of the court) brief in support of Harrington’s appeal, based on the Brain Fingerprinting testing evidence. The Iowa Supreme Court reversed Harrington’s murder conviction and ordered a new trial.

In light of the new evidence, and considering that the only alleged witness to the crime had recanted and admitted he lied when Dr. Farwell confronted him with the exculpatory Brain Fingerprinting evidence, the State of Iowa elected not to try Harrington again.

Harrington and another man falsely convicted of the same crime sued the county, the prosecutors, and the police for framing him. The United States Supreme Court agreed to hear the case against the county. Before the case reached the Supreme Court, however, Pottawattamie County, Iowa settled out of court, paying Harrington and his co-defendant $12 million.