March 9 — Now it may be impossible for even the best liars to conceal their crimes. 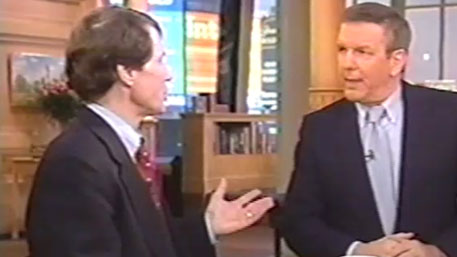 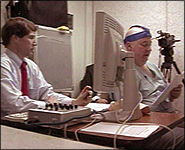 Dr. Lawrence Farwell asks crime-related questions to Jimmy Ray Slaughter as a computer looks for signals in his brain. Slaughter, a convicted murderer on death row, is seeking exoneration.

Charles Gibson: We’re going to show you a new technology. I guess you could call it a new kind of lie detector test, but it’s far more sophisticated than that and it uses brainwaves instead of physical cues like pulse and breathing rate. And it’s now become admissible in some courts in the country. It really is as I said absolutely revolutionary technology and ABC’s Bob Woodruff is here to tell us about how this works, Bob.

Bob Woodruff: It’s very new to a lot of us, Charlie the technology called Brain Fingerprinting is partly responsible for freeing a man convicted of murder from an Iowa prison after 24 years and it may be part of an appeal for a convict on Oklahoma’s death row whose case will be heard by the US Supreme Court any day now.

How often have we heard these words from law enforcement officials, “These are details known only to the perpetrators.” The latest technology in forensic science uses those details to prove a suspect’s guilt or innocence. Developed by Harvard trained Dr. Lawrence Farwell, Brain Fingerprinting uses brainwaves to measure what Dr. Farwell: calls the “Aha!” of recognition. When the brain recognizes a word or picture it releases an involuntary wave called a P300-MERMER. It’s now being used to determine whether suspects were ever at the scene of the crime.

Bob Woodruff: According to Farwell, and his brainwave results, Terry Harrington didn’t have the details of the 1978 murder he was convicted of stored in his brain. An Iowa judge allowed the new technology into evidence in Harrington’s appeal, and now he’s a free man. In Missouri JB Grinder confessed and was sentenced to life after a P300-MERMER revealed he did have special knowledge of the 1984 rape murder of which he was accused.

Now Farwell’s science could save the life of Jimmy Ray Slaughter on Oklahoma’s death row for the murder of his girlfriend and their infant daughter. Farwell tested Slaughter on details Slaughter claimed he didn’t know.

Bob Woodruff: When Farwell questioned Slaughter on the location of the bodies at the murder scene and the position of the woman’s body on the floor, there was no brainwave of recognition.

Dr. Farwell: We have at least a 99% confidence that you don’t have that information in your brain. So what does that mean to you?

Jimmy Ray Slaughter: It means that what I’ve said all along is true.

Dr. Farwell: And what have you said all along?

Jimmy Ray Slaughter: That I was innocent…Sorry (sobs)…

Charles Gibson: Now it’s interesting the test may come too late for Slaughter’s Supreme Court appeal, but the defense is hoping to use it to reopen the case in Oklahoma. And we are joined this morning by neuroscientist and inventor of Brain Fingerprinting Dr. Larry Farwell. Good to have you with us.

Dr. Farwell: Good to be here.

Charles Gibson: Now I want to get some image of how this works. When they do lie detector tests, they react to sweat on the palms, to heartbeat, to pulse, etc., but really what you’re doing is going back to the origin of all those things, which is the brainwaves.

Dr. Farwell: Right. We measure information in the brain. We don’t measure whether they’re anxious or not, whether they’re lying or not, we simply measure a brain response that tells us if that information we’re flashing on the screen is something they recognize as significant, so we can know if they know those details about the crime.

Charles Gibson: This is so new that if you introduce it in a court case don’t you really in effect have to educate the judge as to what it is?

Dr. Farwell: Yes we do have to educate the judge and of course that’s what we do. We were successful in the state of Iowa in the Harrington case in achieving admissibility for Brain Fingerprinting.

Charles Gibson: Have some judges said “Don’t bother me with this, I don’t understand it”?

Charles Gibson: So if you showed me, for instance if I was strapped up to this thing, and you showed me a picture of three people, and I knew one of them.

Charles Gibson: And you didn’t know which one of the three I knew, would you be able to tell right away which one I knew?

Charles Gibson: Because I would have some sort of a brainwave reaction this P300 – what did he say?

Charles Gibson: All right. Is there some way that the test might be invalidated. For instance, let’s say somebody when they committed the crime was on drugs, and therefore doesn’t remember or has no remembrance of where he was at the time, so he wouldn’t necessarily react to the position of the bodies in the room or whatever.

Dr. Farwell: Well, JB Grinder, turned out to be a serial killer, he was on drugs and alcohol at the time of the crime, he was actually on therapeutic drugs, psychotropic drugs at the time of the Brain Fingerprinting test. We got very good results from him. People remember the very major events in their life. Even a serial killer only does it a few times, and it’s a big event. So that tends to have a very solid record in the brain. We can detect that.

Dr. Farwell: We could use it but the way we would use it is not on the victim or alleged victim, we would use it on the suspect. We’d get all the details about the alleged crime from the person who believed they’d been abused,

Charles Gibson: And then do it on the alleged abuser.

Dr. Farwell: Right. And we’d see if he had that record stored in his brain or not. We could detect that.

Charles Gibson: Hmm. How widely, how many applications of this, how long have you been doing research on it, how widely have you tried to use it.

Dr. Farwell: Well, I invented it more than 15 years ago, and I actually withheld the technology from the public for 15 years to do more research. We did research with the FBI, the CIA, the US Navy, the government spend over a million dollars on the research on Brain Fingerprinting. We showed not only in the laboratory but in over 100 actual real-life situations that the technology was effective and we have ever yet to ever get a wrong answer. It’s been correct in every case so far.

Charles Gibson: All right, well very interesting to have you with us, and I’d love to try this out. Can we do this sometime, do a demonstration on the air?

Dr. Farwell: Sure, we can do that.

Charles Gibson: All right, we’ll get you back and we will do that. Appreciate it.